CISPLATIN: Invention of an Anticancer Drug

Cisplatin is best known anticancer drug. Cisplatin chemotherapy recognised for lengthening of survival for some common types of lung cancer.

Cisplatin represents today one of the most successful drugs in chemotherapy. 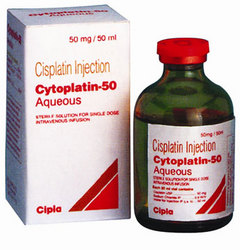 Cisplatin is a tiny little drug molecule that contains a platinum ion in the middle of a flat square with two chloride ions and two ammonia molecules making up the corners. Approved for use in humans in 1978, it was the first of a completely new type of anticancer drug and remains an extremely effective and common treatment for conditions such as testicular and ovarian cancer.

When cisplatin gets into the body, its neutral overall charge means that it can cross the cell membrane. Once in a cell it becomes activated by the replacement of one of the chlorides by a water molecule. The chloride falls off because the concentration of chloride within a cell is much less than it is in the bloodstream. The water itself is, in turn, easily displaced by the basic nitrogen atoms on DNA, specifically on a guanine nucleobase. Once bound to DNA the second chloride ion is replaced by a guanine nitrogen atom from an adjacent DNA strand. 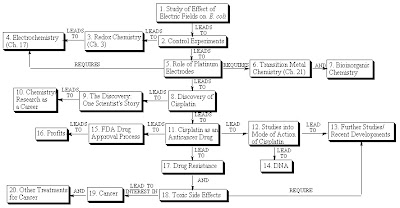 Cisplatin went through several phases of testing before it was approved by the Food and Drug Administration (FDA) for use in the United States.

Cisplatin is administered intravenously as short-term infusion in normal saline for treatment of solid malignancies. It is used to treat various types of cancers, including sarcomas, some carcinomas (e.g. small cell lung cancer, and ovarian cancer), lymphomas, and germ cell tumors. Cisplatin is particularly effective against testicular cancer; the cure rate was improved from 10% to 85%.

Cisplatin saved countless lives. Its available in tablet form as well as Injection. There are many brands available in market.
Posted by PVPharma at 11:56 PM

Email ThisBlogThis!Share to TwitterShare to FacebookShare to Pinterest
Labels: Invention of an Anticancer Drug